A Case Where Media Spend Is Not All About The Numbers

Flurry, a mobile advertising and analytics firm, just came out with a report exploring the disparities between the amount of time being spent on ad platforms and the amount of money spent on them. They noted that the largest disparity between the two was in Mobile – where 23% of users’ time was spent there with only 1% of U.S. ad dollars.  Comparing that to Print media, where 29% of ad dollars meet only 6% of time is spent, then it would seem that things are off-kilter.  While there could stand to be some shifting upward in Mobile spend percentages, looking to align the percentages of time spent with dollars spent on numbers alone in your media planning could leave you dangling in the wind. 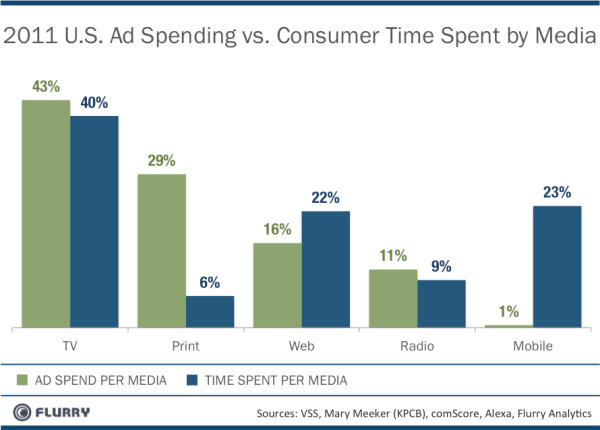 Flurry’s VP of Marketing, Peter Farago stated in the company’s blog post that they “believe the main reason for this disparity (in Mobile) is that the mobile app platform has emerged so rapidly over such a short period of time. …Madison Avenue and brands have yet to adjust to an unprecedented adoption of apps by consumers.” That may be part of the issue, but it misses a number of other key factors:

Taking the above into consideration, there is still a major consideration for Mobile.  When you figure that most use of mobile is done on Apps and mobile websites that do not offer Mobile-specific advertising options, there would definitely be a disparity in the numbers.  Additionally, as mobile advertising is still relatively new, the media program costs are often heavily discounted to either get in the advertiser’s door or provide proof of concept.  With those offerings, there needs to be strong analytical follow-up to derive stronger (and more costly) programs.  As of now, we’re still too early to be able to do that – even if there was enough real advertising inventory to relate directly to the time spent meter.

The report did point to other interesting facts that could lead to a strong future in mobile media with the strongest one being that Upper Middle Class consumers aged 25 – 34 are the most likely to interact with mobile ads.

There is definitely a future in mobile advertising and the chasm between time spent and ad dollars spent will surely come more closely aligned. The smart bet is on more than just the numbers, but the context. The strongest contextual applications will play out in the coming years and the best option is to be ready to pounce when it arrives to generate the best return on any Mobile media spend investment.