In what has become this millennium’s version of the arms race, everyone is racing to build their own second screen app.  While most are now using the same audio recognition technology to sync to the program you’re watching, there have been some that are better than others with strong social connectivity but limited content and some are just plain lame.  Even the one that is my favorite (TVplus) is limited by how much supporting content has been created specific to that show.  That’s why I’m impressed with TBS’ Conan O’Brien Show and their spiffy new Team Coco Tablet App. With its promise of content, regular use, time-shifted capabilities and emphasis on marketing the product well, Conan’s people are doing their best to bring Conan’s coined “TechnoMagic” to the Second Screen experience.

The App itself provides exclusive, synced content in real-time as they watch the show – no matter when that is. They are promising up to 25 different pieces of bonus content per show.  Those all-important bits of content will include video clips, photos, slide shows, guest info, polls, quizzes, facts, trivia, memorable quotes and more.  It’s also integrated with Facebook and Twitter so that you can stay connected while watching the show.  As of now, I can’t tell if those Facebook and Twitter comments from your friends are anchored to specific times in the show or if they just flow in real-time – which would not be as cool if you are watching your DVR’d show the next morning.

The key to any second screen app’s success is the array of content available and the regularity in which it is used.  To this point, Conan takes the cake in regard to regularity with his Monday through Thursday airings and, if they do come through with the 25 bits o’ content per show, they will be a phenomenal leader in providing a solid example of what second screen apps should be.

Add to its functionality TBS’ smarts in marketing of the App and its AT&T sponsorship off the bat and the entire second screen community should be salivating as someone is finally promoting and supporting the second screen universe in the right way.

Team Coco is not just relying on the video above that they hope people will come across, they are doing a media campaign specifically for the app with AT&T getting valuable impressions as well.  When anyone goes to the Conan site, they see a push down unit touting the App. 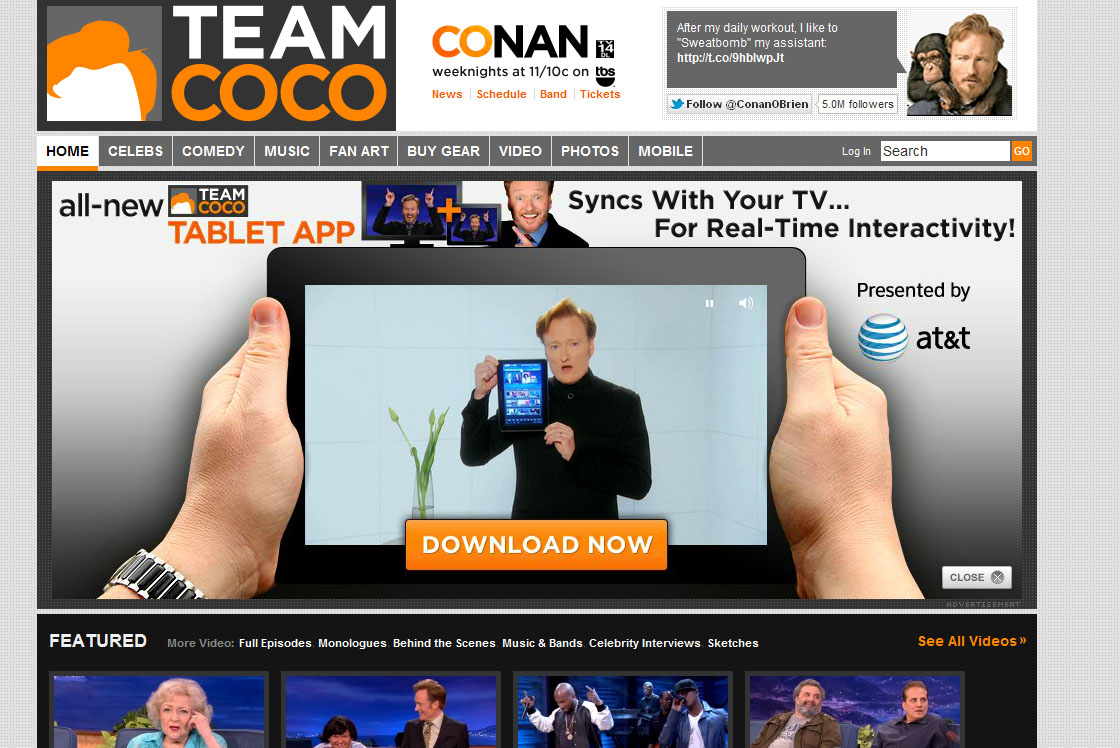 We still don’t know yet how things will play out in practice for this app.  Will they be able to keep up with the content in ways that people will actually care about?  Will the video content be annoying if both audio pieces go at the same time?  Will they come up with phenomenal ways to have exclusive content that makes those with the app feel like real insiders? (A comparison would be when The Late Show first went to HD and wide-screen and Letterman kept moving out of the 4:3 frame so people on standard def could only see part of him…) What the second screen universe really needs is smart and compelling content in an app that will stand as a bellweather of what is possible.  Otherwise, second-screen will continue to be nifty, but nothing more.

Kudos to the entire Team Coco for really stepping out there to throw down the gauntlet and spin their TechnoMagic.